PHENOMENAL WOMAN: THE MAYA ANGELOU SONGS and Songs Without Words 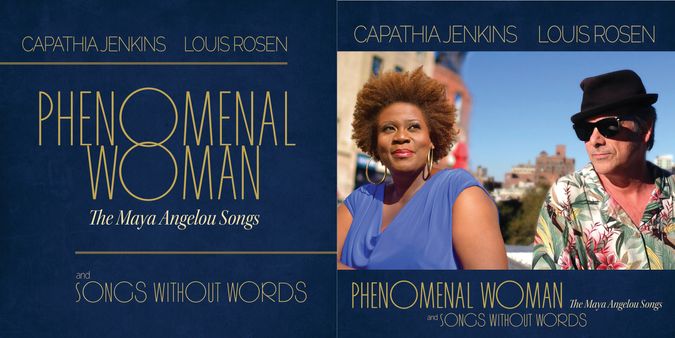 PHENOMENAL WOMAN: THE MAYA ANGELOU SONGS and Songs Without Words

Now available for purchase and downloading at:

(Click on the store's name to be taken to its site.)

"By rights, and I’m a committed fan of Birdland, this indelible cross pollination of classical/opera/jazz/blues/gospel should be at Carnegie Hall – which is not to say you won’t find yourself chair dancing. Composer Louis Rosen’s symbiotic relationship with poet Maya Angelou, muse/vocalist Capathia Jenkins, and his superb band is so organic, so exacting in craft, it’s difficult to imagine one without the other.

"...Capathia Jenkins is unique.... Jenkins seems to become a song rather than perform it.... Exuberance is infectious, anger palpable, pathos visceral...." (from the review by Alix Cohen for Woman About Town)

"'Phenomenal Woman' is a beautifully done project... a beautiful homage to the legendary Maya Angelou." (from the Black Grooves Magazine review by Jered Griffin)

Louis reunites with the phenomenally soulful vocalist CAPATHIA JENKINS for their fifth album together, the new recording, PHENOMENAL WOMAN: The Maya Angelou Songs (Di-tone Records™). The 15 tracks include 11 songs with lyrics by the iconic American poet, Maya Angelou, and four new “Songs Without Words” that weave in and out of the song sequence as prelude and interludes. Louis’ new arrangements for these jazz, blues, soul-infused and classically tinged compositions are for jazz sextet, with occasional organ added in for good churchly measure.

PHENOMENAL WOMAN: The Maya Angelou Songs is also noteworthy in the Jenkins/Rosen discography because it completes the recording of Louis’ substantial opus, the BLACK LOOM TRILOGY, three album-length song cycles written specifically for Capathia on the poetry of three major African-American poets, the other cycles being DREAM SUITE (Langston Hughes) and ONE OUNCE OF TRUTH (Nikki Giovanni).

Click on Louis' Juke Box at the bottom right side of the site to hear three songs from the album -- "Phenomenal Woman: Song for CJ", "Interlude III: Together" and "Out Here Alone."

Louis dedicates this song cycle and its premiere recording to Tom Leavens, for without Tom's selfless effort and generosity, this album would have never come to pass. And the title song, Phenomenal Woman: Song for CJ, is affectionately dedicated to Capathia.