DREAM SUITE: SONGS IN JAZZ AND BLUES on Poems by Langston Hughes 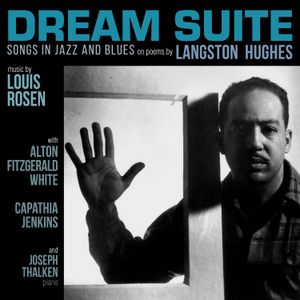 SONGS IN JAZZ AND BLUES

Music Composed and Arranged by

CD Available for purchase at Louis Store (top of this page)

Downloads available at itunes, Amazon.com and most digital outlets.

(Click on the store's name to be taken to its site.)

"Rosen has respectfully taken the work of one of the earliest practitioners of jazz poetry and created symbiosis so organic, it's difficult to believe the two artists didn't work together; songs that reflect comprehension so visceral, Rosen slips a knot of race and history to reach the universal.

"Dream Suite, also a newly minted CD, is comprised of 14 songs derived from 21 poems spanning from the 1920's through the 1950's.... Like those in Porgy and Bess, the songs arrive full blooded and black, hybrid American opera--here without libretto.... I found myself hypnotized." Broadwayworld.com

"...Soulful and rapturous...A gorgeous and heartfelt achievement, brilliantly, holistically attuned to the source material, Dream Suite is a tonic for the times, crossing many boundaries of art and spirit. I would add that the album is a separate achievement in itself, one of the best-produced  CD's of art song I've ever heard." Huffington Post

This effort by Louis Rosen effort to bring the poetry of Langston Hughes back to life highlights something new to be found in Hughes work: a lyricism that lends itself to Lieder and, in the melismatic curves of Capathia Jenkins and Alton Fitzgerald White, a case for Hughes’ words to be food for modern arias as well.... The results are bracing, with a vibrancy and visceral buzz that is often undeniably exciting. Jazz da Gama

“If you have not heard this music, the passion and intelligence of Twelve Songs on Poems by Maya Angelou and  Dream Suite by Langston Hughes was gripping. They are poems of reflection, remembrance and inspiration, with Jenkins interpreting the emotions that Rosen formed into music.” Cabaret Scenes

Listen to a song from Dream Suite on LR'S JUKE BOX on the left side of this website under the photo.

A Note from LR:

Langston Hughes is my favorite American poet. Though his poems often explored the issue of race, his work breaks through racial boundaries to touch the soul of humanity. For me, even his brilliant and iconic image of a “dream deferred” can now also speak to any fundamental, deep dream deferred, whether racial, political or personal. Most important for the composer, his poetry sings with a natural ease and grace that few poets can match. The language is rich in imagery – drawn from influences as diverse as Walt Whitman and various forms of Afro-American culture — yet always rooted in the American vernacular and soulfully direct in emotional expression. This description applies equally well to what I strive for in my songwriting, and especially in the making of Dream Suite. These songs find their inspiration in jazz, blues, classical music, popular song, art song and Latin jazz; and like Langston’s poems, I hope they manage to blend and juxtapose these influences in fresh ways, and with a soulful sense of expression.

Dream Suite is also dear to my heart, for it was written for, and beautifully sung by my friend, the gifted Alton Fitzgerald White; and the recording of it introduced me to the remarkable Capathia Jenkins – who sings here with great beauty and sensitivity – and with whom I set off on a new creative path that led to many more songs and cycles and recordings, a musical adventure that continues to this day.

Dream Suite is Part One of The Black Loom Trilogy, a set of song cycles on the poems of three African-American poets. This recording was made in 2002, the year the composition was completed. The world-premiere performance of Dream Suite was given by Alton and Capathia at the Great Hall of Cooper Union in New York City in June 2006.

The second and third parts of the trilogy were written specifically for Capathia. Part Two is One Ounce of Truth: The Nikki Giovanni Songs (2008), originally released on the PS Classics label. Part Three is Phenomenal Woman" The Maya Angelou Songs, released in 2018 on Di-tone Records.

Capathia Jenkins (vocalist) Broadway credits include: Newsies; Martin Short--Fame Becomes Me; Caroline, or Change; The Look of Love; and The Civil War. Off-Broadway: Nora Ephron’s Love, Loss and What I Wore; (mis)Understanding Mammy—The Hattie McDaniel Story (Drama Desk Nomination); Caroline, or Change; and Godspell. Recordings include the original cast albums Martin Short--Fame Becomes Me; Caroline, or Change; Godspell; Children of Eden; and three CD’s born of the collaboration with Louis Rosen: South Side Stories; One Ounce of Truth; and The Ache of Possibility; as well as many performances of Louis' song cycle Twelve Songs on Poems by Maya Angelou. CONCERT HIGHLIGHTS include soloist for many symphony orchestras in the U.S. and abroad including Cleveland Orchestra, Cincinnati Pops, Philly Pops, National Symphony, Hong Kong Philharmonic and Calgary Symphony. www.capathiajenkins.com

Langston Hughes (February 1, 1902 – May 22, 1967): Poet, playwright, novelist and social activist, a seminal figure in the Harlem Renaissance, Langston Hughes became the most original and revered of black poets. In addition to leaving behind a large body of poetic work, he also wrote eleven plays and countless works of prose, including the two-volume autobiography, The Big Sea and I Wonder As I Wander. The Collected Poems of Langston Hughes, edited by Arnold Rampersad, is published by Vintage Classics.

The recording of Dream Suite was made possible through a generous grant from the Gilman & Gonzalez-Falla Foundation.

Dream Suite is dedicated with love and everlasting appreciation to Sondra Gilman and Celso Gonzalez-Falla.

Poetry © 1994 by The Estate of Langston Hughes

Across / The Harlem roof-tops / Moon is shining. / Night sky is blue. / Stars are great drops / Of golden dew.

Come, / Let us roam the night together / Singing.

2. Lullaby: For a Black Mother

My little dark baby, / My little earth-thing, / My little love-one, / What shall I sing / For your lullaby? / Stars, stars, / A necklace of stars / Winding the night.

Wine-maiden / Of the jazz-tuned night, / Lips / Sweet as purple dew, / Breasts / Like the pillows of all sweet dreams, / Who crushed / The grapes of joy / And dripped their juice on you?**

Do not speak of sorrow / With dust in her hair, / Or bits of dust in eyes / A chance wind blows there. / The sorrow that I speak of / Is dusted with despair.

Love  / Is a ripe plum / Growing on a purple tree. / Taste it once / And the spell of its / enchantment / Will never let you be. / Love  / Is a bright star / Glowing in far Southern skies. / Look too hard / And its burning flame  / Will always hurt your eyes.

Love / Is a high mountain / Stark in a windy sky. / If you / Would never lose your breath, / Do not climb too high.

Who cares / About the hurt in your heart? / Make a song like this / for a jazz band to play:

I could take the Harlem night / and wrap around you, / Take the neon lights and make a crown, / Take the Lennox Avenue busses, / Taxis, subways, / And for your love song tone their rumble down. / Take Harlem’s heartbeat, / Make a drumbeat, / Put it on a record, let it whirl, / And while we listen to it play, / Dance with you till day-- / Dance with you, my sweet brown Harlem girl.

Laughter / Then silence / Silence / Then laughter

Silence / No one talking / Down the street young Harlem / In the dark.

Good evening, daddy! / I know you’ve heard / The boogie-woogie rumble  / Of a dream / deferred / Trilling the treble / And twining the bass / Into midnight ruffles  / Of cat-gut lace.

*The text of the bridge of Harlem Night Song is the poem, Ardella.

**The text of the interlude of Life is Fine is from the poem, “Midnight Dancer.”

***The text for Dream Suite is made from the following poems: