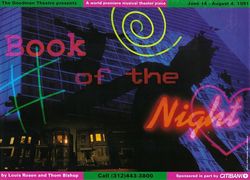 BOOK OF THE NIGHT

by Louis Rosen and Thom Bishop

“’BOOK OF THE NIGHT’ A DUSK-TO-DAWN SUCCESS”

“This new musical is a truly remarkable accomplishment in a genuinely dazzling production….” Chicago Tribune 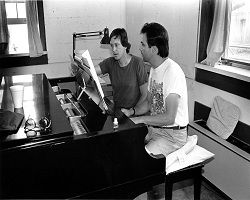 “Book of the Night  flashed like a comet in Monday’s world premiere.... The bold new work by composers and lyricists Thom Bishop and Louis Rosen grips the imagination and storms the senses…."

“The people of the ‘Book’ deal with darkness in different, private ways. Their stories drift and interconnect, creating a bedtime story that could leave you staring at the ceiling until the alarm clock buzzes.” Chicago Sun-Times

“At the final curtain the ensemble sings of drawing strength from the dark before the dawn, and the enormously enthusiastic audience leaves the theater sharing that strength.” Wall Street Journal

BOOK OF THE NIGHT takes place from dusk to dawn one Saturday night during summer in an American city. It follows the intersecting paths and stories of twelve characters. The various stories in and of themselves are smaller than the stuff that a full-length piece would be made of. But when each story or character is put in relief against all of the others, a larger tale emerges, one of ordinary people, all of whom are seeking a connection with someone or something in an increasingly alienating contemporary urban landscape. This is the story of BOOK OF THE NIGHT.

BOOK OF THE NIGHT premiered at the Goodman Theatre in Chicago in June of 1991, directed by Robert Falls, to what were, with a few exceptions, very favorable reviews. It was subsequently the recipient of Chicago’s John W. Schmid Award for Best New Work of that season.

In addition, Louis' work on the piece as composer and co-lyricist/librettist was a significant factor in his being recognized the following year by the Gilman and Gonzalez-Falla Theatre Foundation with their Second Annual 1992 Musical Theatre Award, which included a $25,000 prize.

The piece was revised in 1997 for a small Off-Broadway production at the Greenwich Street Theater, NY.  The following song-list reflects these revisions: