ACT ONE: PIANO MUSIC FROM THE THEATER

CD available now at Louis' Store (at top of this page).

Downloads available at itunes, Amazon.com and most digital outlets. (Click on the store's name to be taken to its site.) 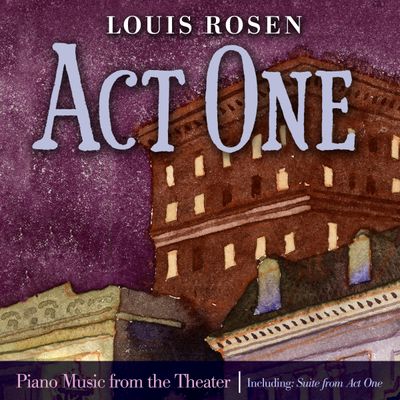 THE BEST OF BROADWAY (And Off-) 2017 (12/18/17) "Exquisitely played by several different pianists and intimately recorded, these works taken together have the fleeting, transportive power of études by Chopin or Debussy; I find myself listening to them again and again…" (Deadline Hollywood)

"Each and every piece on ACT ONE is immensely evocative...A highly pleasurable CD showcasing diverse influences, talent, and imagination.... I recommend listening with eyes closed.” (The New York Press Club Award Winning website, “Woman Around Town.)

"These two recordings, Dust to Dust Blues and Act One: Piano Music from the Theater, further solidify his outstanding reputation. Each is a considerable musical achievement and enters the literature of musical art with the fanfare and heraldry that accompanies important musical documents." (JazzdaGama)

for ACT ONE: Piano Music for the Theater.)

Piano Music for the Theater

I began composing music for plays fresh out of the music conservatory in the summer of 1977. Over the next many years, I composed music for more than thirty productions on Broadway, Off-Broadway, and at various regional theaters around the country—as well as five musical theater pieces—before leaving the theater behind for different pastures. I had the good fortune of working with many fine directors, including James Lapine, Gerald Gutierrez, Doug Hughes, Robert Falls, Scott Ellis, Michael Kahn and Michael Maggio, many of whom I worked with multiple times, a few  of whom became dear friends.

Some scores that I composed for plays seemed to me especially well-suited for expansion as concert pieces. In those instances I transformed those scores into theater suites, some vocal, some instrumental, some both vocal and instrumental, twelve suites in all. Certain suites were composed to fit the original instrumental or vocal combination of the given work, while others were re-imagined as music for either solo or two pianos.

This recording features some of the music for piano. Included are three complete suites and a few individual movements. The span of time covered over the course of these pieces—1977 to 2014—nearly bookends my entire professional composing life. The operative word in that sentence is “nearly” – for there’s still much more to come. 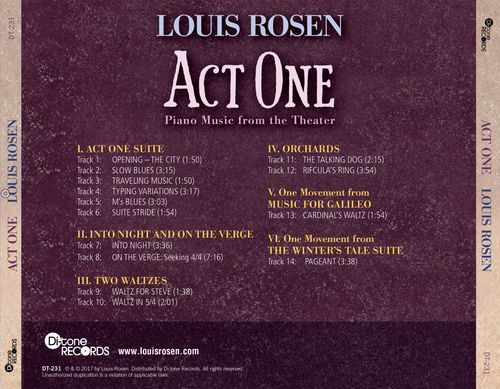 The Act One Suite is drawn from the score composed for the 2014 Broadway production at Lincoln Center’s Vivian Beaumont Theater of the play Act One, written and directed by James Lapine, based on the autobiography by the legendary playwright/director, Moss Hart. The opportunity to write this music for James came as a strange and unexpected gift. I had been concentrating on songwriting, recording and performing for the previous dozen years, and hadn’t composed for the theater in over a decade. I had also been ill for much of 2012 and 2013 and had barely been able to compose at all. One day in August 2013 while in the midst of a relapse, I began mentally cataloging what had, and more to the point, hadn’t been accomplished in my composing life, no longer sure that my health would allow me to continue. One thing I thought about was what had been left undone in my moving away from theatrical work and artists that I wished I’d had the opportunity to collaborate with. The only artist who came to mind, whose name I actually said out loud, was the writer/director James Lapine. The next morning I woke to an email from, of all people, James Lapine, asking me if I was available to work on a new project, his adaptation of Act One. The universe is forever an exquisite mystery. And James didn’t disappoint: he was an inspiring collaborator and a pleasure to work with. I am forever grateful that he gave me the impetus to find my way back to work.

Act One is set in the years between 1925 and 1930. The score tries to suggest the dominant piano styles of the period while moving beyond the limits of direct pastiche. The music for the six-movement suite freely expands, transforms and re-combines the many themes associated with the various characters, ideas and places in the story. The suite is dedicated to—who else? —James Lapine.

(Listen to "Traveling Music" and "Slow Blues" from the ACT ONE SUITE on LR's JUKE BOX on the bottom right side of the website.)

Two Movements for Two Pianos, or One Piano, Four-Hands

Into Night and On the Verge comes from scores written for two productions: Eugene O’Neill’s Long Day’s Journey Into Night at the Portland Stage Company, directed by Barbara Rosoff (1987), and Eric Overmyer’s On the Verge at The Huntington Theater in Boston, directed by Pamela Berlin (1986.) The two scores were composed six months apart and always felt complementary to me. Immediately upon completion of the second score I envisioned combining the music from both works into a two-movement suite. Six years later I finally figured out how to accomplish that goal. Each movement of the suite freely develops and transforms a few musical themes from its particular score. Both strongly rely on imperfect meters, especially 5/8 and 7/8, and a larger goal of the work is suggested in the sub-title of the second movement: Seeking 4/4. (Spoiler alert: 4/4—the groove meter of most jazz and American popular music—is definitely found, a clear metaphor for the direction I was headed with my work as a whole.)

These waltzes are re-workings of two dances from my first professional assignment, a 1977 production of Romeo and Juliet at the Oak Park, Illinois Festival Theater, directed by Dennis Zacek. The first waltz also became the basis of the score for my first professional assignment in New York City, composing for the First Young Playwrights Festival (1982), produced by Stephen Sondheim and the Dramatists Guild at the Circle Repertory Theater, directed by Elinor Renfield. As a way of thanking Steve for his great encouragement, I made this piano version of the waltz,  dedicated it to him, and renamed it Waltz for Steve. The title of the slow, second waltz, Waltz in 5/4 is, of course, an oxymoron, but the title felt like it fit the music. The two dances share the same thematic material—Waltz in 5/4 built on an inversion of the initial melodic figure of Waltz for Steve—and thus have always been, in my mind, a pair.

Two Movements for Two Pianos, or One Piano, Four-Hands

My dear friend, the director Robert Falls, asked me to compose a musical score in 1985 for The Acting Company production of Orchards, an evening of seven new one-act plays by seven contemporary playwrights—Wendy Wasserstein, John Guare, Michael Weller, Maria Irene Fornes, Spalding Gray, David Mamet and Samm Art Williams—based on short stories by Anton Chekhov.  My charge was to compose an overture for the evening, scores for five of the seven plays, and in the process help knit together the production as a whole. My approach to the latter goal of unity was to link the highly varied scores with core melodic and harmonic ideas that transformed from play to play. The production toured the U.S. for one year and played off-Broadway at the Lucille Lortel Theater. Two years after composing the music, I made this suite by expanding the scores for two of the plays: John Guare’s The Talking Dog, and Spalding Gray’s Rifcula’s Ring. The music for The Talking Dog reflects the sudden exhilaration, dips and surges that Bob and I hoped would suggest the thrill of hang-gliding. Rifcula’s Ring is a nocturnal meditation. The two movements fit naturally together, as they each offer highly varied versions of the same essential musical material. The Talking Dog is dedicated to another dear friend, Stuart Oken, while Bob gets the dedication for Rifcula’s Ring.

Soon after our work together on Orchards, Bob asked me to compose for another one of his productions, Brecht’s Galileo, which was slated as the inaugural production for Bob’s first season as artistic director of Chicago’s Goodman Theater (a position that, as of this writing, he has held for thirty remarkable years and counting), featuring Brian Dennehy in the title role. Cardinal’s Waltz is an instrumental interlude from that production and the third movement of the five-movement vocal/instrumental suite, Music for Galileo.

This music comes from a score composed for a 1978 production of William Shakespeare’s The Winter’s Tale, the first of three collaborations directed by my friend Michael Maggio, this one for Chicago’s Court Theater. Pageant is the final movement of The Winter’s Tale Suite, which consists of five instrumental movements for seven instruments. I made a piano version of this movement as a gift for yet another dear friend, Bernie Sahlins, one of the founders of The Second City comedy club in Chicago, who was an ardent amateur pianist. Bernie got the dedication and named the piece.

THANK YOU:
First and foremost to the superb pianists for generously bringing this music to life; to the directors and writers who inspired the music; to James McMullan for permission to use his
brilliant poster art from the Lincoln Center production of Act One; to Scott Lehrer for our
five-decade long recording collaboration; and to the dedicatees for their sustaining friendship. An extra special thanks to the remarkable angel, Joan McKay, who's support made the recording of the Act One Suite possible; and to Jason Brett, Lauren Streicher, Marilyn Katz, George Petty, Susan Friedlander, Mary Ellen Geisser, Margaret Moore and Elizabeth and Walt Bachman, generous patrons all. Much Love,

All compositions © 2017 by Louis Rosen

Distributed by Di-tone Records. All Rights

Reserved. Unauthorized Duplication is a