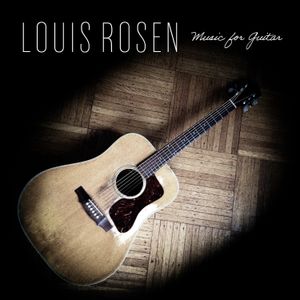 I consider myself a composer who plays guitar and piano, and who over the years has come to realize that the acoustic guitar is his most natural instrument. Though I would, with no undue modesty, describe myself as an ordinary player in the key of G, the guitar was my primary instrument for a while in my late teens and early twenties until the piano took over as the instrument of choice for composing. Then about fifteen years ago, I found myself at an artistic impasse while trying to compose a new song cycle: all of the ideas I was exploring at the piano felt stale. I felt stale. Much to my surprise, I picked up the guitar and the new songs began to flow. Every song since has been composed on the guitar.

Cut to February 2019. I had the idea to compose a cycle of instrumental pieces for solo guitar, something I had never done before. The stylistic and compositional parameters of the work became clear when I decided I would be the intended soloist. Whatever I chose to compose, I would have to be able to play it. Whatever the result, it would be as much a portrait of my strengths and limitations as a guitar player as it would reflect this particular moment in my evolution as a composer.

The twelve character pieces that emerged became Music for Guitar. All were written between February and April, 2019 and can be heard as instrumental songs – songs without words. Each one in its own way blends and juxtaposes aspects of folk, rock, jazz and classical music – as does most of what I write – but this time with an emphasis on the folk-based side of the equation, which has always been my essential orientation to the instrument.

Thematic and harmonic relationships recur in some of the movements, but there’s no large, over-arching structural conceit. The order of the twelve pieces, and dividing them into two groups of six, owes more to thinking in terms of the old – and now new again – approach to sequencing the two sides of a vinyl album than any classical structural model. The names of the individual pieces sometimes reflect something about the music itself, and more often the circumstances surrounding creation. Music for Guitar was recorded in September and November, 2019 with my long-standing collaborator, Scott Lehrer at the controls.

1. Passamel: The title refers to my initial thought about the opening single-line, unaccompanied melodic idea: that it would make an interesting passacaglia melody (passacaglia being a form dating back to the Baroque era). I didn’t write a passacaglia, and there’s nothing Baroque in character about the music, but the thought inspired me to call the piece, Passamel.

2. Before Rain: The musical seed for this one came when I was composing the score for the 1999 Broadway revival of the play, “The Rainmaker.” Alas, the idea didn’t fit that score’s needs, but evolved twenty years later into this piece. The timing of when I received the idea suggested the title, “Before Rain.”

3. Air: This title reflects the two meanings of the word “air”: First, the use of the word as a synonym for song; second, that the music itself is spare, leaving a lot of air around and within the main melodic line and accompaniment.

4. Travis-Tea: The finger-style of playing utilized in this piece is Travis Picking, named after country guitarist Merle Travis. The Travis technique is accomplished by alternating the thumb between two or three bass strings on the beat while the index, middle and fourth fingers pluck the higher strings, often on the off-beats. While composing this song without words I thought a play on words regarding my personal approach to this style could be named “Travis-Tea,” or travesty – depending on your point of view.

5. Midnight Song for C.M.: A late-at-night, tender love song for C.M. No more needs to be said.

6. Snooping: A guitar groove. The essential idea reminded me of “Spooky,” a hit song from 1968. But when naming the piece I misremembered that title as “Snoopy”, which led me to name the piece “Snooping”, where according to this line of thinking I should have named it “Spooking.” As it turns out the music feels more like “snooping” than “spooking,” so all’s well that ends well.

7. MSNBC (or 78 to 44): This song without words was composed amidst the din of MSNBC playing in the background, which may or may not have contributed to the generally agitated character of the music. The subtitle 78 to 44 is an inside musical joke, referring to the recurring asymmetrical 7/8 meter continually seeking the symmetrical stability of 4/4.

9. Severin Hotel: Driving from Brooklyn to Indianapolis for a weekend of performances, I found myself listening and re-listening to a range of Brazilian music, including the first two Sergio Mendes and Brazil ’66 albums, favorites of mine since I was a boy. Upon arriving at Indianapolis’ Severin Hotel, I took out my guitar and found this piece.

10. Night Blues: The main strain of this one is a minor key twelve-bar blues that, like so many of these pieces, was composed late at night. My favorite section is the major key middle interlude.

11. Fly Not Hence: Last spring I found myself acting the lead role in a short student film titled “Fly Not Hence.” This music was written at that time as a personal musical response – though not as a soundtrack – to the gray, haunted mood of the film.

12. Eight and Forty in a Pie: The Intro. theme of this concluding piece is based on a riff for a song that I wrote to a Nikki Giovanni poem called “Kiss a Frog” that sets the line “eight and forty in a pie” – thus  the title. This is the only one of the twelve pieces that was written to be strummed with a flat-pick, not finger-style. For this premier recording I invited my friend, the terrific multi-instrumentalist David Mansfield to improvise a second guitar part.

Thanks to Scott Lehrer for so many years of productive collaboration; the late Steve Fingerett for teaching me two finger-style patterns one spring afternoon in 1971, the one truly useful guitar lesson I ever had; and as so many times before, the remarkably generous Joan McKay.

Music for Guitar – Composed and Performed by Louis Rosen

All compositions © 2022 by Louis Rosen/Lullwater Music, ASCAP. All rights reserved.

™ DT-255 ℗ & © by Louis Rosen. Distributed by Di-tone Records. All Rights Reserved. Unauthorized Duplication is a violation of applicable law.